4th Week of March – We're finally getting settled into South American way of life. We are enjoying being in our new place (even though it's bare). We now have air conditioning, a security system, appliances to cook meals, and to do laundry. Now, all we need is a couch to make it complete! Our shipping container is scheduled to leave around April 14th. This weekend we are going to Pilar to spend some time with our church brethren. It is a small town about 5 hours south of Asunción. Should be fun!
Posted by The Spradlins at 4:20 PM No comments: 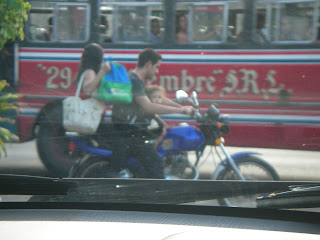 This is a very common sight in Paraguay. Motorcyles are used for all kinds of transportation and there are hundreds of them zig zagging through traffic all the time. Sometimes, they drive on the sidewalk! In this case, it is this family's means of transportation. Notice the little girl sitting on the gas tank. She wasn't the least bit frightened and I think Andrea and I were more afraid for her than she was.
Posted by The Spradlins at 11:58 AM No comments: 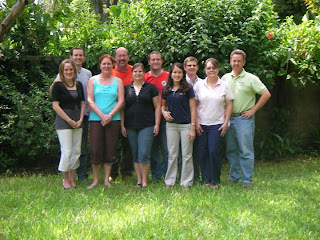 This is a picture of the current mission team in Asuncion, Paraguay. Also in the picture with us are Jerry and Gail Heidrich from Brazil. They came over to help the team learn how to deal with new transitions and to develop into a stronger unit. The workshop covered about four days and was a wonderful help for the team. We are thankful that God has provided such talented workers as the Heidrichs to help missionaries in the field. The team feels much stronger and closer now.

L-R are Vickie and Chris Fry, Gail and Jerry Heidrich, Cara and Josh Blackmer, Alba and Perry Hardin, Andrea and Troy Spradlin.
Posted by The Spradlins at 10:45 AM No comments: 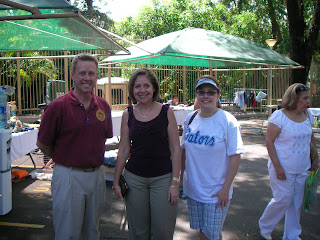 Andrea and I went to a "garage sale" at the U.S. Embassy, last week, where several embassy employees were trying to sell their belongings before returning to the States. While we were purusing through the tables we happened to meet the U.S. Ambassador to Paraguay, Ms. Liliana Ayalde.
She was very nice and quite informative as to what the office of the Ambassador entails. She is from Maryland and also has a home in Ft. Lauderdale. She regularly speaks with the President of Paraguay, Fernando Lugo, and recently set up a meeting between him and Hillary Clinton. Later that afternoon, I saw a photo of her in the local newspaper and I have seen her on TV several times since then. Kind of neat to have met one of our dignitaries here in Paraguay.
Posted by The Spradlins at 7:09 PM No comments:

Today is a Paraguayan national holiday. It is "El Dia del Heroes." On this day, 140 years ago, Mariscal Francisco Lopez was killed in battle which marked the end of the extremely bloody War of the Triple Alliance. Lopez was the dictator of Paraguay and is now considered a national hero. He is buried in the Pantheon del Heroes in downtown Asunción alongside several other Paraguayan leaders. 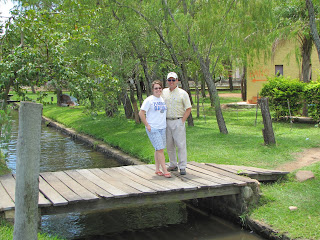 Since we had the day off, we decided to go sightseeing outside Asunción to what is called the "Chacko" (also known as the "interior" by the locals). We went to San Bernadino and Los Altos. These were sights that were founded by German immigrants who wanted to start the "master race." It was 50 years before Hitler began his same attempt, in 1880 by a Dr. Forster. He became an influence for the Nazi ideas and the town eventually became a hiding place for the Nazi fugitives. Dr. Mengle, the "Angel of Death," is rumored to have fled to Los Altos when Germany was defeated.
The beautiful little town is on the edge of Lake Ypacarai. We stopped and had lunch, then took a walk down by the lake. Josh snapped this picture of us on a pathway near the water. It was a fun day!
Posted by The Spradlins at 8:45 PM No comments: 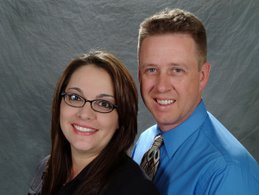